skip to main | skip to sidebar

YESSSSSSSSSSSSSSSSSSS!!!!!!!!!!!!!!!!!!! I've been so nervous to weigh myself for the last couple of weeks. I had a doctor's appointment two weeks ago and I was 206. Then it was my time of the month (yay for three months in a row!), so I just avoided the scale like the plague to avoid disappointment. Yesterday, I needed to do my 8 month stats. I do pictures and stats every two months and while technically that would have been Saturday, I lost track of the date (it was the weekend!). Anyway, I was hoping for a 202 - and I couldn't BELIEVE it when I saw 198 on the scale! I weighed myself three times to be sure. YEP! 198!!!! I'm officially out of the 200s and the scale starts with a 1 - therefore I'm in ONEderland! And it's NICE here!!!
Here are my pictures. I've been wearing the same camisole for all my pictures, but it's just too big now so I'm wearing a size XL top my sister-in-law gave me in the "during" pic and those are size 16 Lee jeans. I'm wearing a size 14 dress :)
Before: 324 lbs (these pictures were taken at 313 lbs), BMI 52.3, size 24 pants 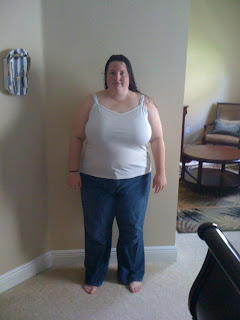 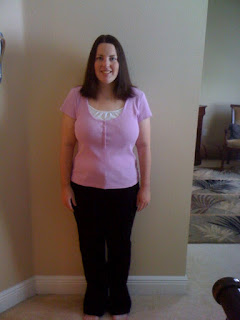 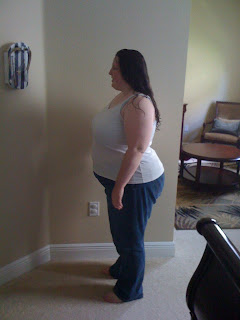 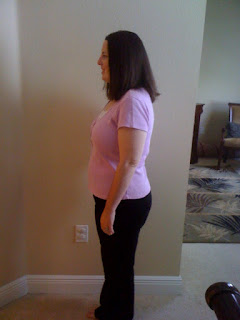 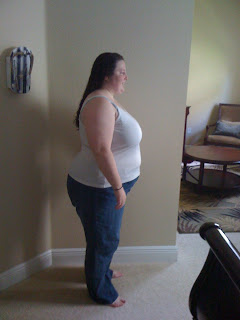 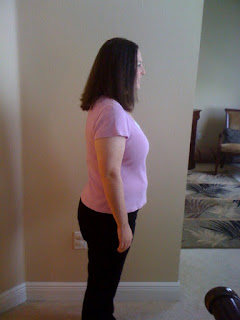 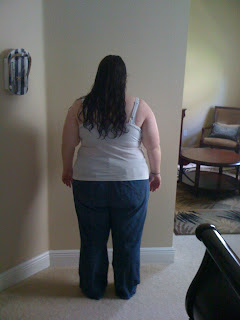 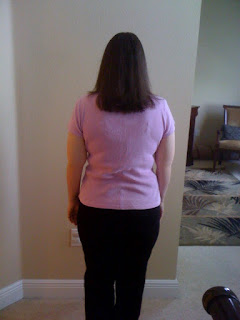 I can't even begin to describe the difference that I feel. When I look at the before pictures, all I can think about is how much pain I was always in. It was hard to stay balanced between my big butt and stomach pulling me back and forwards. My knees always hurt and I had headaches all.the.time. I have so much more energy now. And my overall confidence is greater. I feel better. I love getting dressed up and doing my hair and makeup. It's a whole other world.
I am very strict with my eating. I haven't veered much away from my staples. I think it's a little nervousness about weight loss success. I know that what I've eaten has worked and I don't want to change it up until I'm at goal. So, I stick with meats, edamame, cheese, and veggies. Of course, I have the occasional bite or two of dessert. And I don't feel guilty about it whatsoever. I've also gone out three times since surgery and had drinks with friends. I am much more of a lightweight, but I let myself enjoy the occasional drink. My surgeon didn't tell me to avoid, he just warned me that it may hit me quickly and that I obviously shouldn't drink too many calories. But occasionally, I'm sure he would be fine with it. I've been working out for the past 6 weeks, at least once a week but usually twice. I am so unmotivated so it's hard, but at least I'm doing something. I had my wedding rings resized recently - I went from a 9 to a 7.
My surgeon's goal for me is 174. So I am 24 lbs away from success in his eyes. But I may want to go a little lower - like 150. We'll see. So far, I am VERY happy with my progress and would do it again in a heartbeat!
Posted by Jen at 5:19 PM 4 comments:

Steve and I have started working out at least twice a week - usually three times - and it's really made a difference in my weight loss. Last week I lost 4 lbs and this week's loss is 3 lbs. This is a great improvement from the 1-2 lb loss I was experiencing. I'm down to 210 lbs this week - onederland is so close!
We've really been enjoying our late spring/early summer. Steve finished his MBA! And we celebrated with family by going to dinner the night of (four chicken wings for me) and going to SeaWorld the next day. I was able to enjoy SeaWorld without dying of exhaustion. The next weekend we hosted our cousin and her triplet boys and were able to enjoy the community pool and keep up with them. This past weekend we went to Weeki Wachee Springs and I wasn't too big for the water slides! I'm comfortable in my one piece bathing suit with board shorts and don't feel as self conscious about my body. I feel so free to do all these fun things!
Posted by Jen at 9:01 PM No comments:

Well, that would explain it...

TMI warning
Well, now I understand how it was physically possible not to lose weight this week. I got my period today. And I would just like to add that this is 28 days after my last period! OMG - is my body working normally??? Hopefully, these regular cycles will keep up - that will tremendously help us TTC. Even though I have awful cramps and a backache, I'm so grateful. Yahoo!
Posted by Jen at 9:46 PM No comments:

How is it physically possible?

I didn't lose any weight this week. GRRRRRRR. I don't know how it's PHYSICALLY POSSIBLE! I eat like a freaking BIRD! Last week I lost 4 lbs and the two weeks before that nothing. I didn't work out as much as I should have last week, but I didn't work out at all for the longest time and still lost weight. I guess I'm out of the "honeymoon" period. But my logical mind still does not understand how I can consume 600-700 calories a day and not lose weight. I know people may say I'm not getting enough calories - which makes even less sense to my logical mind. I'm going to weigh tomorrow and see what the scale says. I swear my weight fluctuates so much from day to day, from morning to afternoon. I always weigh Monday mornings and it made me look forward to one aspect of Monday. I'm going to have to rethink that now that the scale isn't making me happy anymore!
Posted by Jen at 5:29 PM 1 comment:

Good things and the Dentist

Steve and I had so much fun after I posted the doc appt post. I had gotten home from work a little early since I had the doc appt (around 5 as opposed to the usual 6), so we had a few hours of daylight left. Instead of going to the gym, we went for a walk around the neighborhood and then jumped in the community pool! It was so much fun. I hadn't swam in so long and after all this time of being focused on my weight, it felt good to feel weightless. We also had a ton of fun just being with each other. Walking home with the sun going down was so, so nice. It was a great time.
In news completely opposite of "great": I had to go to the dentist today because I've been having such a hard time with one of my teeth. The gum has been sore and it's been very sensitive. Come to find out my gum has receded and the root is exposed. There is nothing that can be done about it. I just have to brush with a prescription toothpaste for the next 3-6 months until the sensitivity is lessened. The dentist said over time I won't be able to feel it anymore. Bummer. I wish there was an instant fix because I'm tired of chewing on one side of my mouth. And weight loss surgery patients have to have good dentition to chew the million times that are necessary so food doesn't get "stuck". Boo.
Ok, back to good news. I found an amazing protein bar. "Impossible," you say? Nope - it is the Pure Protein bar in Chocolate Deluxe. Yummmm... It does have quite a bit of carbs (13 g), but my nutritionist said that was ok because they are good, vegetable carbs and I only eat one a couple times a week. And it has 20 g of protein.

Here is the website. You can't buy them on this website, but they have a "where to buy" section. I picked mine up at Walmart (rarely do I go to Walmart, but I need a cheap in-between-sizes bathing suit!) and have also bought them from Publix. I also tried the Blueberry Crumb Cake flavor which was also amazing. They are chewy and not rock-hard like other protein bars I've tried. And yes, those are real (fake) chocolate chips you see! I say it again - yummmmm. And yes, the protein bars and my dental problems are completely unrelated!
Posted by Jen at 5:46 PM No comments:

Labels: Bumps in the road, VSG

Steve and I met with Dr. Koppman today for my 6 month check-up. It was nice to have Steve's support and for him to see first-hand the kinds of things the doctor is keeping up with. I had labs done and most everything looked great. He said my HDL (good) cholesterol isn't exactly where he likes to see it and my triglycerides were a little high. But these things will continue to improve as I lose weight so he's not concerned. My iron was normal, but at the low end of normal, so I have to be more diligent about taking my iron. The only bad thing was my folic acid - this was low. The normal range is 2.7-17 and mine was 4. So it wasn't the worst, but it was pretty bad, especially if I want to conceive in 6 months. Which by the way, he said we could plan for!! He wants me back in October - October 12 is my appt - for a year follow-up and wrote me a script for labs to get before that appt. If my labs look good then he said he would have no problem advising pregnancy!! OMG - I am so excited. And we talked about my goal weight - which is much higher than what I thought I saw on their computer. He has it at 174. I may choose to go under that, but that is when he would consider me successful. That is a total of a 150 lbs loss - and I've already lost 104! I can SO do the last 46 lbs. That's NOTHING!!
Overall, I am very happy and the doctor is very happy with my progress. And Steve is happy too!
Posted by Jen at 4:43 PM No comments:

I lost 4 lbs this week! (Well, 8 days). It's about time the scale moved more than 1 lb a week! It has to be because I switched back to Crystal Light and exercised twice last week. I'll be keeping it up. This large loss couldn't have come at a better time. I was so frustrated last night after reading on OH's "Pregnancy After WLS" board. Most women on there were saying their doctors made them be at a stable weight for 6 months before encouraging a pregnancy. Since I still have a ways to go it, the slower I lose, the longer we have to wait.
Steve is going with me to the surgeon this afternoon for my 6 month checkup. I'll ask him what his criteria are and we need to settle on a goal weight. I peeked at their computer one time and saw their goal for me at 135, which I think is just crazy. I weighed more than that in high school. I would be happy at 160 or 165. So we'll see what happens. I'll write a follow-up to that appt.
Posted by Jen at 10:30 AM No comments:

Jen
I had no idea what I was getting into by choosing to quit my job and stay at home to raise a family. This is an honest window into my life so others may make a better (but probably not) informed decision. Sometimes I'm busy, sometimes I'm lazy, sometimes I'm funny, and I'm always crazy.